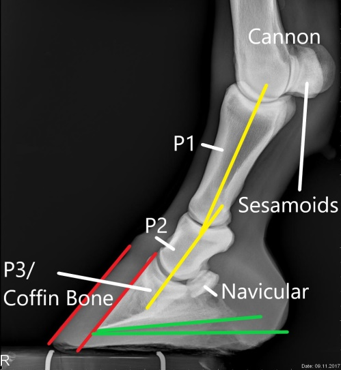 Dr. Rick Redden, an expert in equine podiatry, once said that if you find a horse with a perfectly symmetrical foot in Germany, he would fly to Germany, look at the horse, and then buy you the most expensive steak dinner money could buy if you were right. While he was joking at the time, his point was that no horse has a perfect foot. As such, it’s really important to work with each foot on an individual basis.

First, let’s talk about normal anatomy. The picture below is an x-ray of an almost normal foot. The three bones of the most concern are the Coffin bone, P2, and P1. If you’ll look at the red lines, they represent the outside of the hoof wall and the front of the coffin bone. These two lines should be parallel. The green lines represent the coffin bone/ground angle. A normal foot should have some degree (usually 2-3 degrees) of elevation when compared to the ground. The yellow lines represent the pastern angle. In a perfect foot, this line would be unbroken when run through P1, P2, and the coffin bone. The angle would also be a perfect 45 degrees when compared to the ground.

One of the most important things to do when assessing foot issues is to take some x-rays of the foot. This can tell your farrier what needs to be worked on to make your horse as comfortable as possible for as long as possible. In this newsletter, we’ll talk about some of the common foot abnormalities we see. In the next newsletter, we’ll talk about how to address these issues.

This is one of the most common problems that veterinarians and farriers deal with. This particular foot conformation can lead to lameness problems because it puts lots of pressure on the back part of the foot, especially when the foot is breaking over (lifting the heel off the ground). When you look at the picture above, this horse actually came in for a marked lameness in this foot. Without doing an MRI, and based off the foot conformation, he probably has injuries to the tendons and ligaments in the back of the foot caused by all the stress in that area. Looking at the x-ray, what you’ll notice most is that the yellow lines don’t match at all and seem to bend backwards. This is referred to a “broken back” angle of the pastern. Notice also that the green line, which represents the bottom of the coffin bone, is parallel with the ground. Sometimes, the coffin bone can even point down. This is what is known as a “negative palmar angle.” The goal in shoeing a horse like this is to lift the heels and bring the bones into a better alignment.

This foot conformation causes the foot to look very “upright,” and is caused by the deep digital flexor tendon being too tight. The reason this can lead to lameness is because the tip of the coffin bone presses down on the blood vessels below it. Without blood flow, the hoof can’t grow underneath the coffin bone, so usually there is a very thin sole between the bone and the ground. If you look at the x-ray below, you’ll notice that the yellow lines bow out towards the front. We call this “broken forward.” And while the red lines on the front of the foot are still parallel, the green lines have a very large angle, more than the 2-3 degrees that is considered normal. The goal in shoeing a club-footed horse is to have enough sole for the horse to be comfortable, and to be able to trim the heels enough that the growth doesn’t contribute to making the club foot worse.

This month we’ve looked at some of the most common issues veterinarians and farriers deal with when looking at the horse’s foot. Stay tuned next month when we’ll talk about how to manage or fix some of these issues.