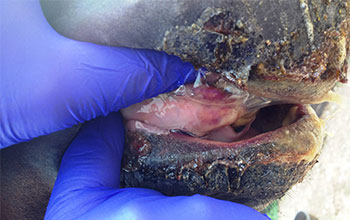 Recently, we’ve all been hearing a lot about Vesicular Stomatitis because it really limits the amount of travel that horses can do. The Ohio Quarter Horse Association even made a statement that they would not be allowing horses from affected counties to attend the All-American Quarter Horse Congress in October.

So, what is Vesicular Stomatitis? VS is a viral disease that affects mostly horses, cows, and pigs. In horses, it causes blister-like sores around the nostrils, lips, and in the mouth, and can also be found around the coronary band, sheath/udder, and belly. It may cause a lot of drooling and unwillingness to eat, as the sores are very painful.

Why is VS so scary? There are really two reasons why everyone is concerned about vesicular stomatitis. Yes, VS can cause monetary losses in that food animals will not thrive if their mouth hurts and they can’t eat. However, the biggest reason VS is so scary is because it looks like Foot and Mouth disease, and it is impossible to tell the difference without doing specific testing. FMD has not been reported in the US, and its impact on the US agriculture industry would be DEVASTATING. The other reason people are so concerned about VS is that it is also zoonotic, which means it can be transferred from humans to people, usually by coming into contact with saliva or through biting insects.

The take home message: if you notice little blisters on your horse’s muzzle, coronary band, sheath/udder, or inside their mouths, call your veterinarian IMMEDIATELY. This is a reportable disease and must be identified in order to prevent the spread and make absolutely positive that it is not FMD.